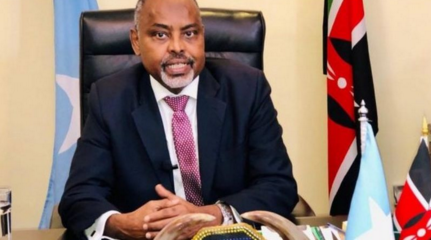 The Ministry of Foreign Affairs said it has also ordered the Kenyan ambassador to Somalia Lucas Tumbo to return to Nairobi for consultations.

Mohamed Ali Nur, permanent secretary of the Ministry of Foreign Affairs, said the decision was taken in response to Kenya’s intervention in the forthcoming elections of Jubaland regional state.

“The government took this decision while preserving its national sovereignty after it appeared that Kenya was deliberately interfering in the affairs of Somalia, particularly Jubbaland,” Nur said in a statement.

Somalia accused Kenya of putting a lot of pressure on the Jubaland president to implement its political and economic interests, thus undermining Somalia’s recently struck political agreement in violation of diplomatic practices.

Nur added Mogadishu will never accept any act that undermines its sovereignty and security.

“The Somali government expresses its regret in the government of Kenya’s overt and blatant interferences in the internal and political affairs of the Federal Republic of Somalia which has the potential to be a hindrance to the stability, security and development of the entire region,” Nur said.

He said that as a result of Kenya’s political interference in the internal affairs of Somalia, the regional president of Jubaland has reneged on the election agreement that was reached on Sept. 17 in Mogadishu.

He said Somalia strongly upholds the principles of interdependence and maintaining its friendly relations with its neighboring countries.

“However, the Federal Government of Somalia believes that the Kenyan government actions are not in line with the internationally recognized diplomatic relations enjoyed by Sovereign States,” said Nur.