Four killed as 15 Suspects in the assassination of Haiti’s President arrested. 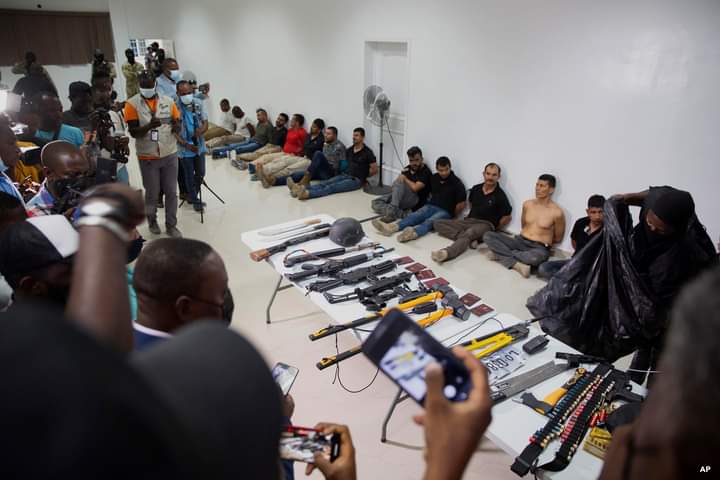 Suspects in the assassination of Haiti’s President Jovenel Moise are shown to the media, along with the weapons and equipment they allegedly used in the attack, at the General Direction of the police in Port-au-Prince, Haiti, Thursday, July 8.

More than a dozen people have been detained in the assassination of Haitian President Jovenel Moise, officials said late Thursday.

Haitian authorities described a heavily armed hit squad of 28 “mercenaries,” made up of 26 Colombians and two Haitian Americans, accused of being involved in the killing of Moise, 53, at his private residence in a wealthy suburb of the capital, Port-au-Prince, before dawn Wednesday.

Haiti National Police Director Leon Charles said Thursday that 17 men had been detained, along with two American citizens and 15 Colombians.

“The pursuit of the mercenaries continues,” Charles said. “Their fate is fixed: They will fall in the fighting or will be arrested.”

Early Friday, Taiwan released a statement saying that 11 suspects were caught on the grounds of the embassy in Port-au-Prince after attempting to flee police.

“The police launched an operation around 4:00 p.m. (Thursday) and managed to arrest 11 suspects,” the Taiwanese Embassy statement said.

The U.S. State Department has not confirmed the reports that two U.S. citizens are in detention.

Late Thursday, Colombia’s government confirmed that at least six of the suspects, including two of those killed, appeared to be retired members of the Colombian army. It did not identify the suspects.

“This death will not go unpunished,” Joseph told the impoverished nation of 11 million people in an address Wednesday.

Brian Concannon, a human rights lawyer, a former United Nations human rights officer, and the founder of the Institute for Justice and Democracy in Haiti, told VOA that the state of siege allows police to do “anything necessary” in pursuit of the killers.