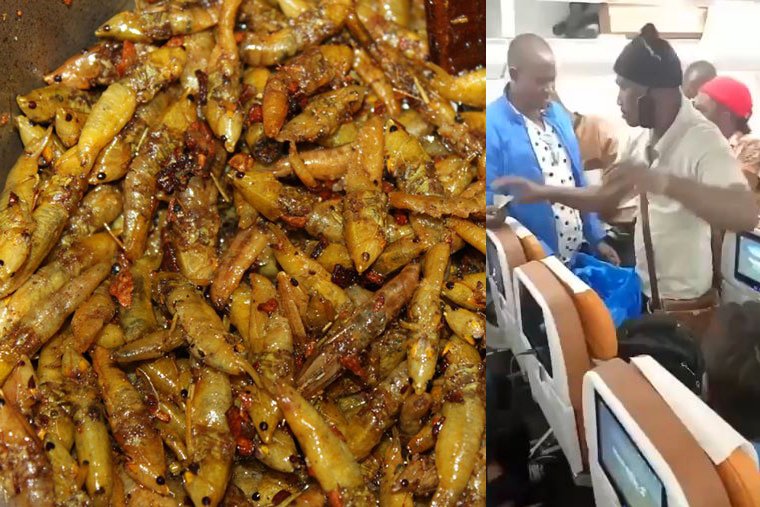 Paul Mubiru is the name of the gentleman who was filmed hawking nsenene or grasshoppers, a Ugandan insect delicacy mostly eaten during the month of November due to its seasonal bloom.

On 26th November, a video that is thought to have been filmed by Paul Mubiru and his acquaintance Kiggundu Habib went viral. In the video, the same Paul was seen selling grasshoppers in flight to the economy class passengers, 10,000shs a scoop as he was caught saying in the video.

The in-flight hawker at Entebbe airport, Dubai-bound Uganda, was identified as part of the KACITA group – Kampala Capital City Traders Association. The chairperson of the KACITA GROUP Mr.  Musoke Thaddeus confirms that Mr.  Mubiru, is part of the association, a known purchasing agent for several business people in Uganda.

“He is also a transporter (locally known as Katumwa) who transports goods from Dubai on behalf of other traders who do not want to travel,” Mr Musoke said. He added that the act of Mr. Mubiru was very unprofessional and believes should be punished.

Minister of Works and Transport – General Katumba Wamala has ordered for suspension of Uganda Airline’s staff who sanctioned this action like he had shared his disappointment on twitter earlier.

Paul Mubiru and Kiggundu Habib are facing jail term after police opened three(3) charges against them for;

The Prime minister – (Katikiro) of Buganda Kingdom, Charles Peter Mayiga however thinks all these concerns are not necessary and he testifies to have seen hawkers before in flight like Forex Exchange, doing business just as Mr.  Paul Mubiru did.