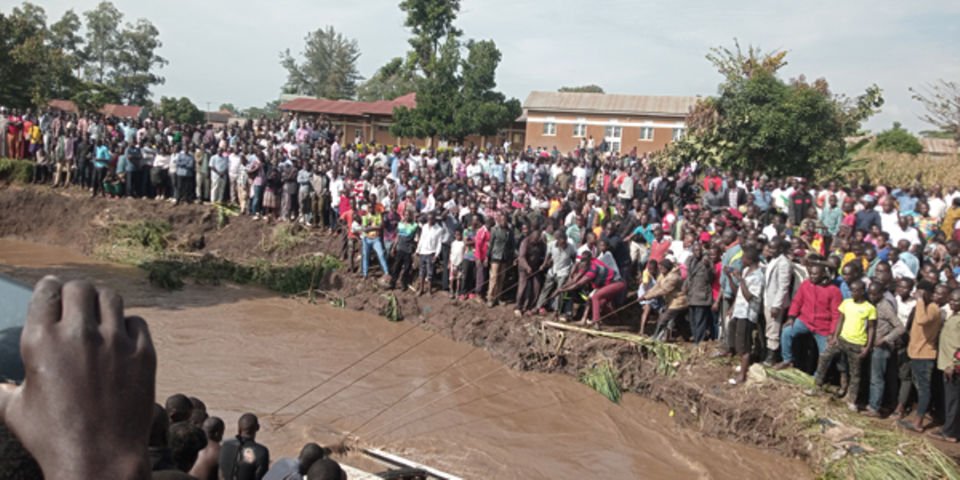 Residents try to pick a car wreckage from the Nabuyoga river.

On Saturday, after a heavy down pour, river Nabuyoga in Mbale city burst its banks leaving many homeless and some dead.

The floods destroyed  several areas after the rivers including; Nabuyoga, Namatala and Nambale burst banks destroying houses and displacing hundreds.

Death toll has risen from 10 to 23, as police spokes person – Fred Enanga reports that 23 bodies have been recovered.

The 11 of the 23 were traveling in a Toyota Super custom to attend a marriage ceremony in Kabwengasi sub county , Buteebo district. Three have been identified as; Nalubega Prosy, Edward Mugumya, Richard Mulindwa.

“They were coming to attend my introduction. They were travelling in one vehicle and they all died after their car was swept into the river by the floods,” Mr Kasandha (the groom) said.

Residents of Mbale cry out for help insisting that government has been slow to respond to the emergency since many lack accommodation and food.

“We need the government to provide us with temporary housing structures because we don’t have accommodation,” an affected resident said.

Fred Enanga, however says that police teams have been sent to the area to help in the search and rescue process.